The Facility for Rare Isotope Beams (FRIB) will provide unprecedented access to exotic nuclei; approximately 80% of the isotopes predicted to exist up to uranium (Z = 92) will be produced. The FRIB Decay Station (FDS) — an efficient, granular, and modular multi-detector system designed under a common infrastructure — will have a transformative impact on our understanding of nuclear structure, nuclear astrophysics, fundamental symmetries, and isotopes of importance to applications.

The scientific program enabled by the FDS is well aligned with the overarching science goals that have been formulated by the broader nuclear science community, most recently outlined in the 2015 NSAC Long Range Plan. A total of seventeen specific benchmark programs were specified in the 2007 NSAC report “FRIB: Opening New Frontiers in Nuclear Science” that are matched to the overarching scientific questions. The FDS will contribute to the majority of the seventeen benchmark programs, which are highlighted in the table below. 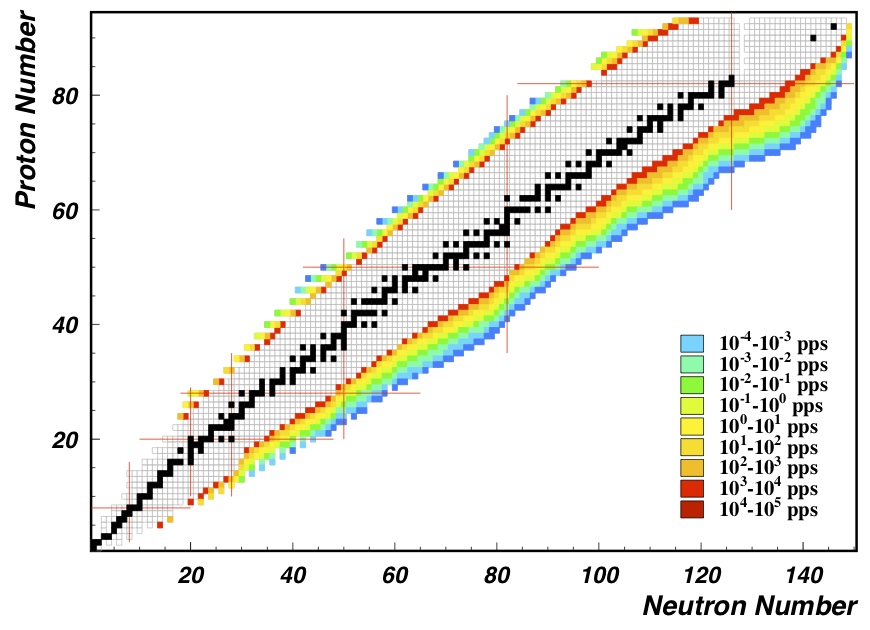 How does subatomic matter organize itself and what phenomena emerge?

How did visible matter come into being and how does it evolve?

Are the fundamental interactions that are basic to structure of matter fully understood?

How can the knowledge and technical progress provided by nuclear physics best be used to benefit society?

The FDS is uniquely positioned to make crucial contributions towards discovery experiments at the extremes of the accessible regions, see FRIB beam rates. The high sensitivity and relatively low beam-rate requirements of the various decay spectroscopy techniques enable decay measurements at the very limits of the production capabilities at FRIB. In addition, for nuclei produced at higher rates, the FDS will enable high-precision measurements for thorough characterization of emergent phenomena, which can be used to benchmark and differentiate between leading models.

More specific science opportunities have been largely outlined in the FDS White Paper. A few highlights include: